The Costs of Vaccine Damage: The Payout Figures

Vaccines are supposed to be safe according to the U.S. CDC/FDA, so how come the HRSA division of the U.S. Department of Health and Human Services publishedStatistics Reports [1] for the period ending September 3, 2013 providing data verifying that vaccines cause damage and even kill?

The period covers fiscal years (FY) 1989 to FY 2013. There were 3,387 compensable claims—meaning those claims that received compensation or money, and 9,651 claims that were dismissed, an awful miscarriage of the original intent of the National Vaccine Injury Compensation Program created by Congress and Public Law 99-660, in this writer’s opinion.

Here is the nitty-gritty of the reports filed: Injuries, Deaths, Compensated, and Dismissed claims.

Please study the data carefully. You will notice the vaccines causing the most damage were:

The vaccine attributed to causing the most deaths was DTP with 696 deaths.

Coincidentally, of the 32 vaccines listed, very few—only 5—had no deaths attributed.

The chart below is copied and pasted from the HRSA website.

Claims Filed and Compensated or Dismissed by Vaccine 1 September 3, 2013
Vaccines Listed in Claims as Reported by Petitioners 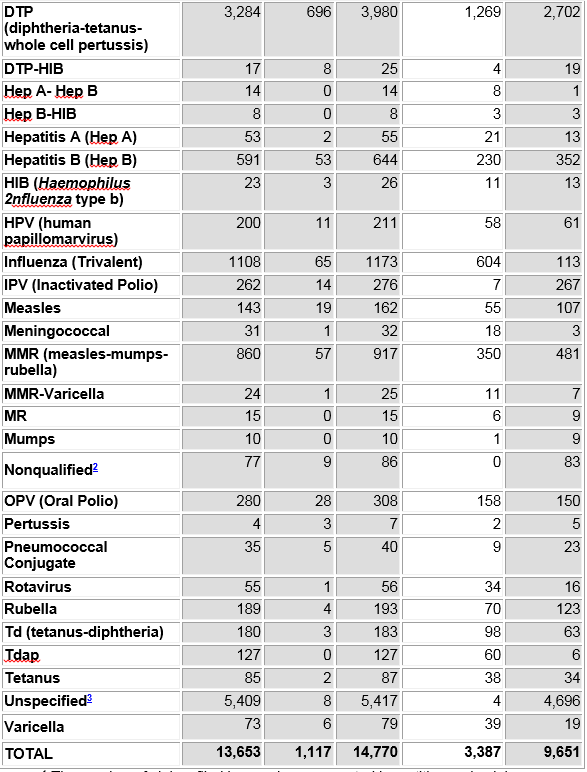 1 The number of claims filed by vaccine as reported by petitioners in claims since the VICP began on October 1, 1988, and how many of those have been compensated or dismissed by the U.S. Court of Federal Claims (Court). Claims can be compensated by a settlement between parties or a decision by the Court.
2 Claims filed for vaccines which are not covered under the VICP.
3 Insufficient information to make a determination.

However, in the last report at the bottom of the HRSA Statistics Reports website, data list how many doses of various vaccines were administered during calendar years 2006 to 2012. The vaccines that seem to pose the most problems are: Influenza, DTaP, MMR, Tdap, HPV, and Hepatitis B.

The total doses of vaccines given during that time frame were 1,968,399,297 – almost two billion vaccines. However, those vaccine administered figures are not juxtaposed against the VAERS reporting system for adverse events, which needs to be taken into consideration for the “full force and effect” of vaccination campaigns and public relations.