WikiLeaks has published what it claims is the largest ever release of confidential documents on the CIA. It includes more than 8,000 documents as part of ‘Vault 7’, a series of leaks on the agency, which have allegedly emerged from the CIA’s Center For Cyber Intelligence in Langley, and which can be seen on the org chart below, which Wikileaks also released: 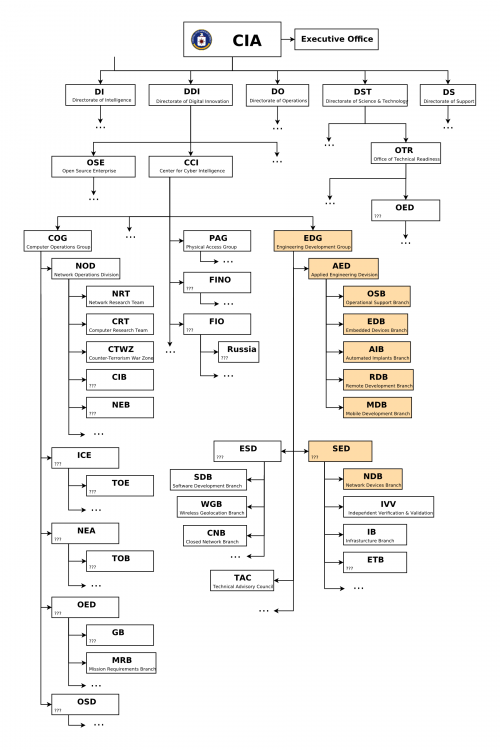 A total of 8,761 documents have been published as part of ‘Year Zero’, the first in a series of leaks the whistleblower organization has dubbed ‘Vault 7.’ WikiLeaks said that ‘Year Zero’ revealed details of the CIA’s “global covert hacking program,” including “weaponized exploits” used against company products including “Apple’s iPhone, Google’s Android and Microsoft’s Windows and even Samsung TVs, which are turned into covert microphones.”

WikiLeaks tweeted the leak, which it claims came from a network inside the CIA’s Center for Cyber Intelligence in Langley, Virginia.

Among the more notable disclosures which, if confirmed, “would rock the technology world“, the CIA had managed to bypass encryption on popular phone and messaging services such as Signal, WhatsApp and Telegram. According to the statement from WikiLeaks, government hackers can penetrate Android phones and collect “audio and message traffic before encryption is applied.”
​
Another profound revelation is that the CIA can engage in “false flag” cyberattacks which portray Russia as the assailant. Discussing the CIA’s Remote Devices Branch’s UMBRAGE group, Wikileaks’ source notes that it “collects and maintains a substantial library of attack techniques ‘stolen’ from malware produced in other states including the Russian Federation.

“With UMBRAGE and related projects the CIA cannot only increase its total number of attack types but also misdirect attribution by leaving behind the “fingerprints” of the groups that the attack techniques were stolen from. UMBRAGE components cover keyloggers, password collection, webcam capture, data destruction, persistence, privilege escalation, stealth, anti-virus (PSP) avoidance and survey techniques.”

As Kim Dotcom summarizes this finding, “CIA uses techniques to make cyber attacks look like they originated from enemy state. It turns DNC/Russia hack allegation by CIA into a JOKE“